ShopVue brought their customer experience to the forefront effortlessly through a modern MES platform envisioned with CUE Canvas, an enterprise design system that provides rapid prototyping at a low-cost investment.

Low-Cost Investment for a Modernized CX

With the manufacturing world rapidly moving to digital tools, ShopVue knew they had to start executing the next stage of their digital transformation quickly. ShopVue provides a manufacturing execution system (MES) that is uniquely positioned to help companies optimize their people, processes, orders, and machines in a manufacturing setting. While ShopVue, which is ERP agnostic, offers all the rich capabilities of truly enhancing the manufacturing process for a lean output, the user experience (UX) needed to be modernized. In its current state, the system had challenging technical complexities and a cumbersome navigation process. More importantly, as ShopVue continued to expand, it became very evident that the system had reached the end of its life and lacked the ability to grow with them. The hours spent to custom code and adapt the program to meet their business needs was no longer a viable or cost-efficient plan. The ShopVue team needed a modern UI for the MES platform that included:

Not only were the internal issues of the system glaringly obvious, but their prospects and customers were suggesting that ShopVue’s UX wasn’t up with the times – it needed to be modernized. While they were impressed by the robust function and depth of ability of ShopVue’s system, their enthusiasm quickly waned when exposed to the vintage look and feel. They couldn’t shake the feeling that this dated appearance reflected on how efficiently the system could perform and felt training on this platform would be a challenge. Customers have even said “You do have the robust, operational capabilities we are looking for, but it’s an old, archaic system,” and quite frankly, they were right. 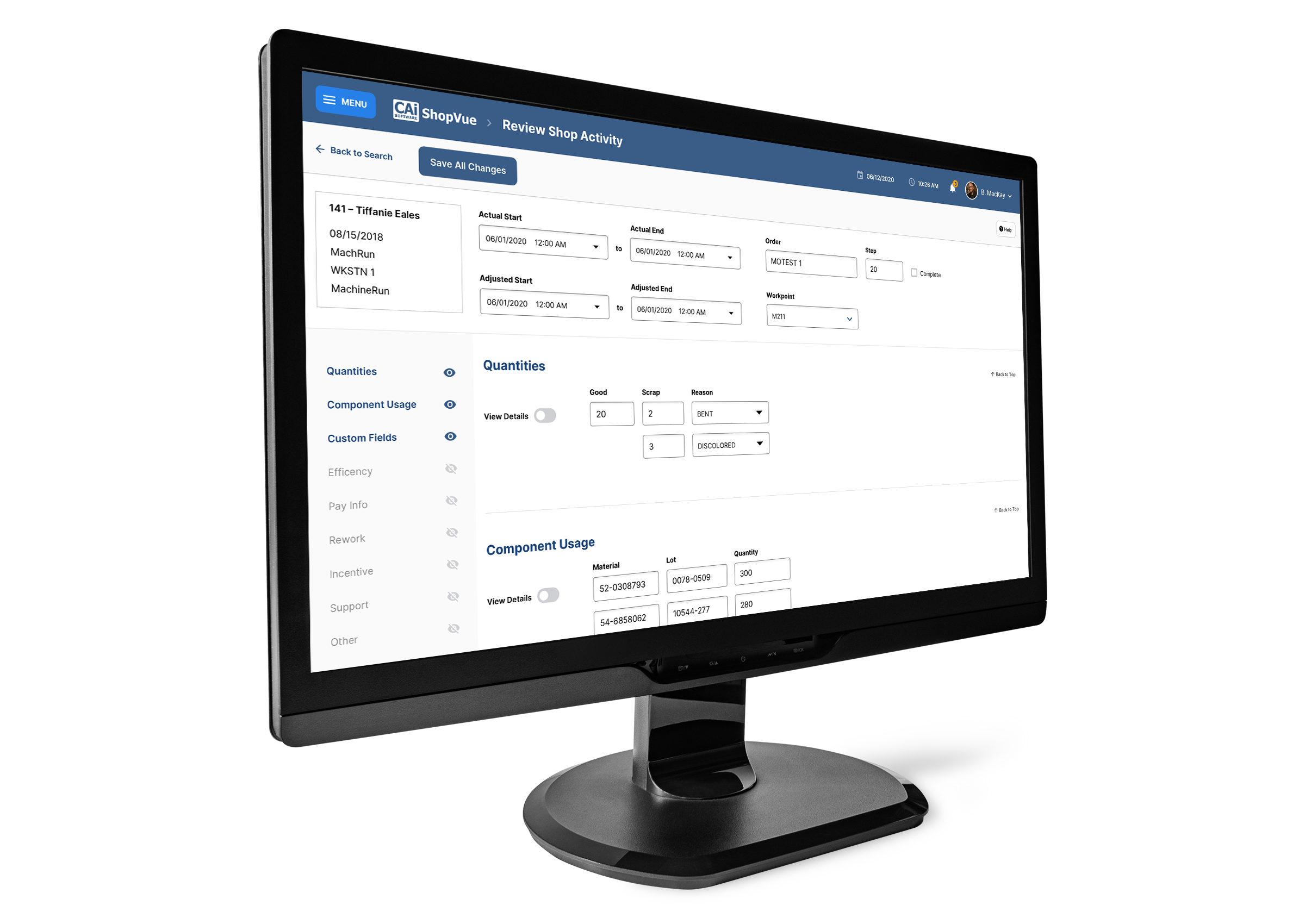 After receiving critical feedback, on top of losing a couple of prospects due to the “dated UI”, it became apparent that now was the time to give ShopVue the much-needed facelift and enjoyable, intuitive UX customers have been asking for. With the support of their user community, Steve Cascio, ShopVue’s Chief Customer Officer, and John Hamilton, Chief Technology Officer, embarked on the journey of establishing a cost-efficient, next-generation UI enterprise design system that could be brought to market in record time.

ShopVue partnered with Excellis Interactive after interfacing in real-time with CUE Canvas, a UI design system that seamlessly incorporates best design practices and an enhanced UX to rapidly-produce a company-branded prototype at a low-cost investment. Developed internally by usability experts at Excellis, the CUE Canvas blueprint can be applied across all enterprise applications and be scaled in a matter of minutes to meet the ever-changing needs of ShopVue’s growing business. It easily demonstrated the ability to streamline the robust functionality of ShopVue’s current UI while presenting it in an intuitive and simplified way. Once fully implemented, the new modern MES platform will require limited training for ShopVue’s customers. 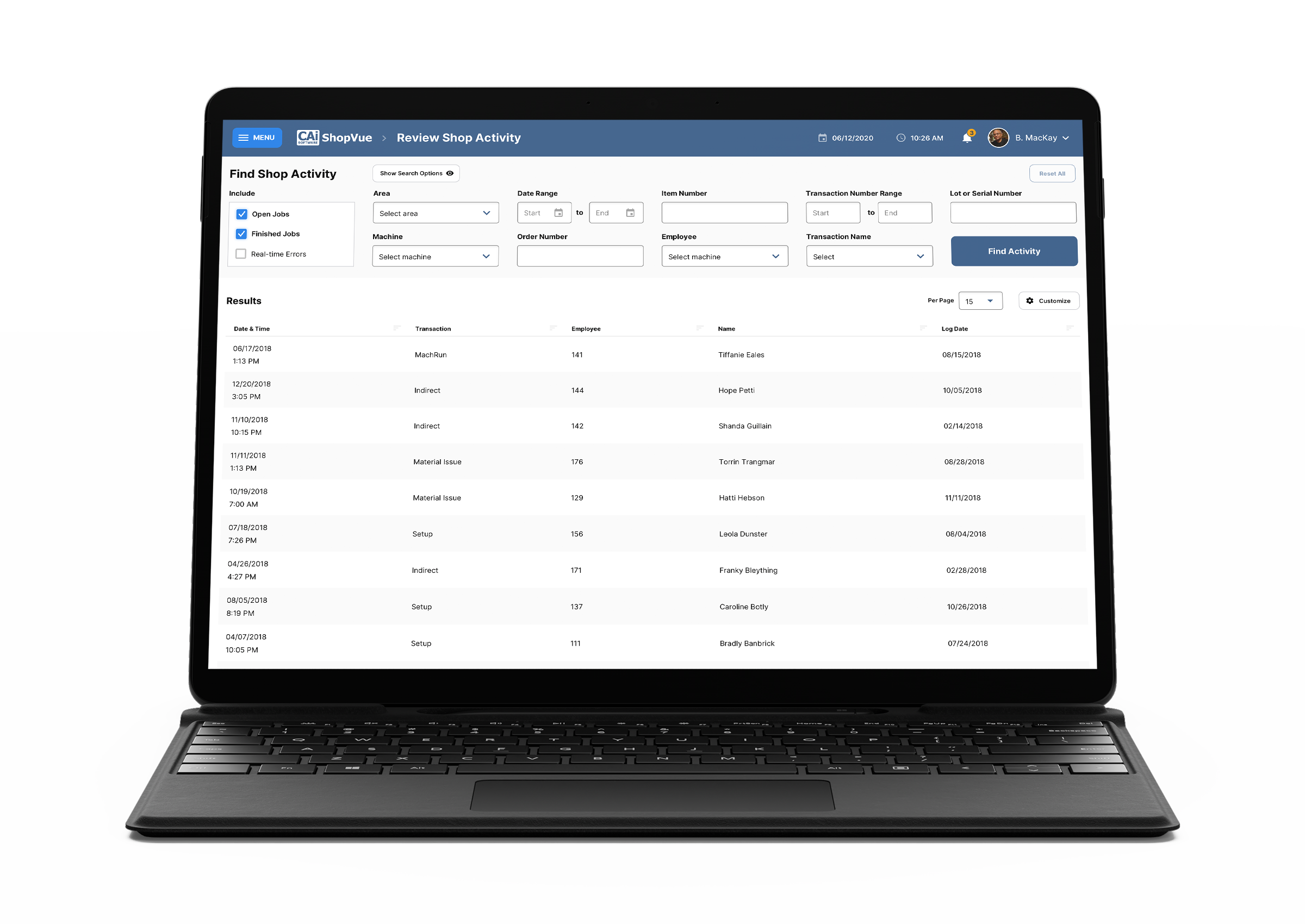 ShopVue was blown away by the high value, low cost to get this strategic initiative started and strong, long-term collaborative efforts with the Excellis team. As Steve puts it: “We did evaluate another company and their product felt clunky. We felt it was going to be a long, challenging, and expensive road; where with you, it was quick and painless. It was a think tank kind of approach.”

“It gave me peace of mind as we continue to go down this digital transformation journey that we can reach out to engage with your team. You established yourselves as subject matter experts right away.”

Within three days of partnering with Excellis, ShopVue was able to see the system’s new and improved wireframes and show their customers and stakeholders a responsive and intuitive new UI prototype for their Shop Activity and Labor Management tool that facilitates all aspects of shop floor planning for its users. This allowed them to get immediate feedback on the new modern-day tool. Having real-time access to the UI and a direct line to Excellis’ developers rapidly sped up the process and allowed them to implement changes with the brush of keystroke.

To further build confidence among the ShopVue team, Excellis designed the new system in such a way that the UXPin and development are almost perfectly aligned. This allowed ShopVue’s development team to seamlessly input this new branded design and extend the blueprint into other applications for current and future use with ease for a consistent branded look and feel. 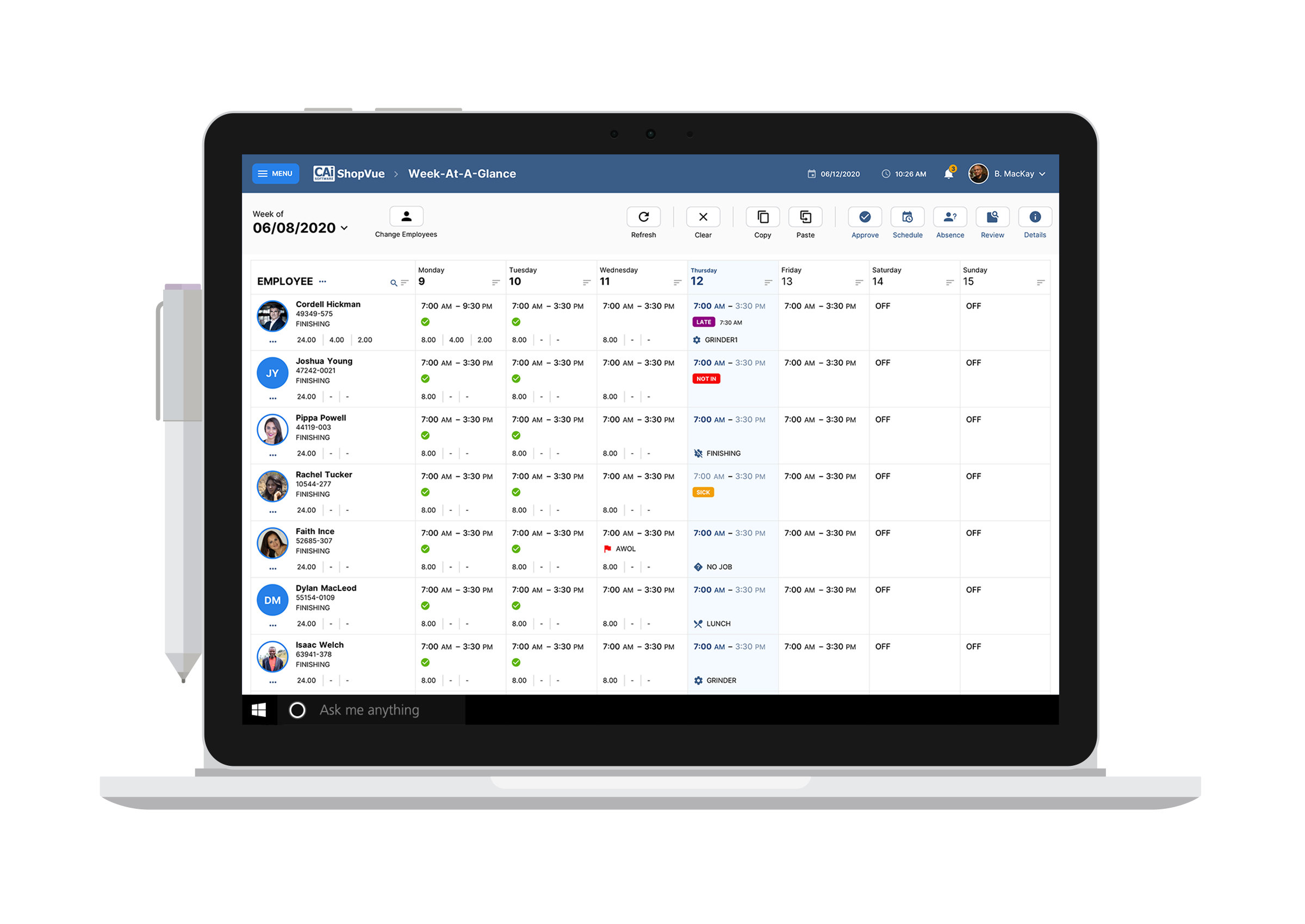 Having complete access to all the assets and style guides has eliminated the need for ShopVue’s internal development team to waste time on custom coding, and instead kept them focused on quickly and efficiently implementing this new tool. This ultimately cut down the timeline on when they can bring their new MES to market. John expresses: “It was tangible very quickly. I didn’t feel there were any real constraints with CUE Canvas. We can simply deliver on what has been designed: a live collaborative document that we can pick up at any point.”

“Very early on we saw success. Rather than waiting until the end of the project to see things, we got to see the final product within the first three days.”

At the end of their 4-week engagement with Excellis, ShopVue now has a responsive system that has taken the rich functionality and depth of capabilities from their legacy program and rebuilt it on the latest technology. It offers a streamlined, simplified, and more intuitive package that requires minimal training and optimizes the UX for a stress-free, cost-efficient, and timely way of doing business. The CUE Canvas blueprint allows the ShopVue development team to code a company-branded UI that perfectly aligns with the approved prototypes and can easily be expanded to successfully support ShopVue’s growing business. By removing all the guesswork, ShopVue’s developers can stay focused on the task at hand and their customers will be able to increase their productivity with the simplified, easy-to-use UI that is set to launch in early 2021.